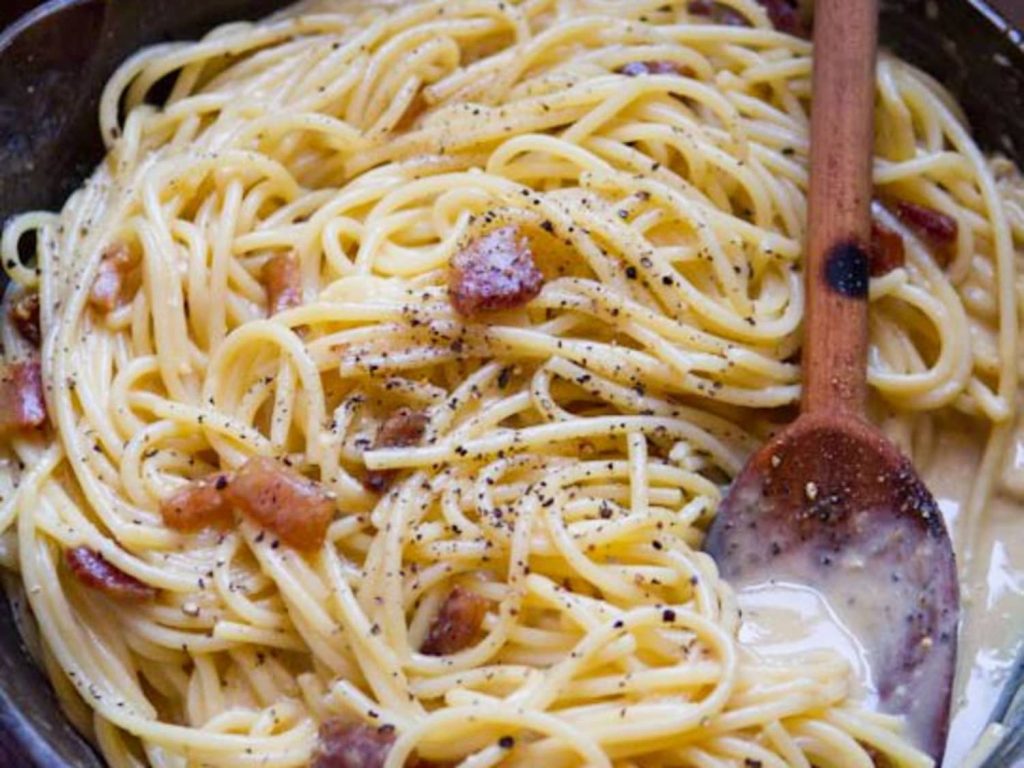 The real carbonara – the irascible chef

In this article legendary chef and food writer Alastair Little opens up on the real carbonara (not the travesties generally foisted on people!)

Spaghetti alla carbonara: a pasta dish made with fat cured pork, grated cheese, coarsely ground black pepper and eggs probably appeared first in Rome in 1944 or 1945. It was almost certainly an extemporised dish making use of the abundant eggs and bacon the occupying American forces were handing out to the famished population.

This largesse would be used with dried pasta (one of the few native foodstuffs still available) and some carefully hoarded and very dry Pecorino Romano.

Why it is named after carbone (charcoal makers) is anybody’s guess, there are as many theories about this as there are methods of making the dish itself!

The one I subscribe to is the most prosaic; in which the black pepper flecks in the dish served to remind people of the soot associated with charcoal the only cooking fuel available towards the end of the war. The propensity of this soot and other particles to get into everything would have been well known to Roman cooks. More fanciful explanations for the name include one alluding to a secret society, the carbonari, from the time of Italy’s unification.

Whatever the origins of the dish and its curious name I know where and when I first ate it. It was 1969, the place was Cosimo’s an Italian restaurant next door to the ‘Bun Shop’ my favourite pub when I was an undergraduate at Cambridge. It was excellent, as was all the food there, and included no cream.

The next thousand versions of the dish I ate did use cream, and seemed somehow disappointing, but Cosimo’s version was gradually forgotten until 1995. That year I was travelling to, or returning from Orvieto every Wednesday of the summer. The journey to Orvieto involved two hours wait at Rome’s Termini station for my train northwards. I killed this time profitably by searching out cheap, small and good restaurants in the area. Did not find many, but one gem, name forgotten, was discovered and on every Wednesday the pasta special was Bucatini alla carbonara. It was exactly like my first time so many years before; no cream, very fatty bacon and the egg coating the robust pasta beautifully.

This was it, this was the version, the authentic Roman working class article. I have never deviated from this since and never will, when something is perfect it does not need ‘improving or ‘mucking about with’ in any way. Here is the recipe…

This is the definitive version of this classic pasta dish. Definitive in both ingredients and method. If you want a dish that will simply obliterate all other carbonaras then you are going to have to put some work in on the shopping front. I have, reluctantly, suggested alternatives to some of the harder to find ingredients.

Put a large pan of water on to boil, salt lightly. Cut the Guanciale, after removing the rind, into small dice and place in a frying pan. Add three tablespoons of water, one tablespoon olive oil and the rind then cook on a very high heat until the water is evaporated and the meat begins to fry in the oil. Turn the heat down and sauté until golden but not dark brown. Taste for tenderness. By this time the water should be boiling vigorously so drop the pasta in and stir thoroughly.

Separate the eggs, throw away the whites and place the yolks in a bowl. Add two tablespoons of water and the chilli. Whisk thoroughly. Grate the cheese. The pasta should be stirred regularly and checked for doneness from seven minutes onwards. Drain when done (tender but with a resistance to the bite) and return to the pan, add the Guanciale, toss over a high heat, add the egg mixture and immediately, stir thoroughly. Add half the cheese, mix again and serve promptly. Offer the rest of the cheese at the table.

Visit the SHOP for a range of Alastair’s legendary dishes, all cooked to order and delivered fresh.

Sign up HERE for irascible chefery at its finest.

We are experiencing significant order volumes at present. Please bear with us, we will get freshly-cooked dishes to your doorstep. Your first available delivery date will show in your cart and at checkout. We deliver twice-weekly to all central London postcodes. Our menu is a little slimmer at present, but check out delicious new treats in our range of Essentials. Please stay safe, Alastair Dismiss