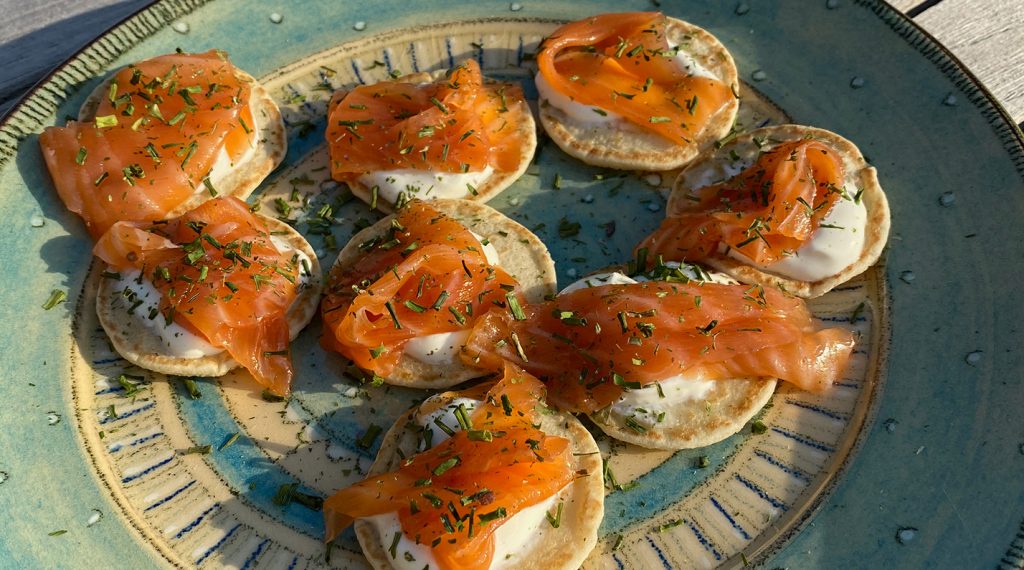 Not some old fashioned ‘taking of the waters,’ but a generic term for the type of smoked salmon produced in London for the last one hundred and ten years…

Jewish immigrants from the eastern Baltic area, and carried on with splendid consistency by their descendents, initially imported, already salted fish in barrels of brine from the Baltic – in the same way herrings are to this day – then smoked them in brick kilns.

However, demand for this essentially new product rapidly outgrew supply and fresh fish were substituted, the salting, filleting and smoking all being done in the East End of London.

Most of these fish came from Scotland and were described on menus as ‘scotch smoked salmon’ when in fact the correct title should have been; ‘smoked scotch salmon.’

This simple semantic mistake is probably the origin of a very widespread misconception that smoked salmon, as we know it. originated in Scotland when in fact it came from much closer to home.

There is of course a long tradition of smoking fish of all sorts in Scotland but the salmon was quite different from what we eat now, being much smokier, saltier and drier, a preserved product for winter storage rather than a delicacy.  I say ‘was,’ because the London cure and variants of it have been exported to Scotland and many other parts of the British Isles with widely varying degrees of success.

My first experience of eating smoked salmon was aged ten in 1960 on my first  trip to London when my father’s rich and glamorous cousin Margaret treated us to rather a lot of the stuff.  Needless to say, I have loved it ever since.

It was, until the 1970s, a ludicrously expensive product, produced from wild fish and not widely available outside luxury hotels, expensive grocers and fishmongers.  However fish farming began to get going in the seventies & eighties and we rapidly began to see dramatic falls in price and a much wider distribution.  This burgeoning growth was a very mixed blessing as commercial fish farmers began to cut corners and employ as many dubious practices as their land bound colleagues.

It is only by some miracle that we have not had major public health problem on the scale of BSE stemming from abuses in fish farming, and the ecological consequences are still not fully known but are certainly a legion.  At that time I would not touch farmed fish with a bargepole, finding it flaccid, tasteless, often over fatty and rather disgusting in appearance with atrophied fins and tail.  This rather grim picture has partially improved.  Some fish are farmed less intensively, in strongly tidal waters with much improved and often organic diets, all of which have improved the quality coming from the better farms enormously.

The London smokers have had to adapt and switch to farmed fish (wild smoked salmon is still available at a comparably ruinous price).  They have had to survive in a harsh economic environment (due to competition from mass produced salmon, expensive but essential investment in non polluting smoking kilns, slicing and packing equipment plus numerous stringent and expensive regulations governing their premises).

To do this, they seem to have recognised that their main advantage is the body of unique knowledge and expertise they possess.  These people are not beginners and this coupled with a seemingly stubborn refusal to even consider lowering their standards has stood them in good stead.

The awful products of the eighties and nineties turned many people off smoked salmon but when the same folk, given a few years to forget, are re-introduced to the real thing they rapidly acquire a fresh zeal for what is one of Britain’s finest gastronomic treasures.

We buy our salmon from W&F Fish, a family run business based in Chalk Farm.  Established in 1936 by Morris Fulberg and continued by his son Michael and grandson Andrew they draw on a tremendous repository of skill and tradition to produce an outstanding product.

Their fish come from a farm in the Shetlands and are very carefully selected indeed, then salted, dried, smoked and sliced with consummate skill.  Their fish is never frozen and so rapidly processed that fish taken from the kiln that morning will be sliced, packed and delivered to us by lunchtime.

Simplicity itself: take three very thin slices of rye bread per person and spread lightly with cream cheese and top with a healthy morsel of smoked salmon (10 to 15 gr). Can be gussied up with sprigs of dill, small prawns, dollops of caviar or even a slice of cucumber, but do not really need it.

Pairs spledidly with our cocktail blinis from Brittany.

Sign up HERE for irascible chefery at its finest, and more tales of our Food Heroes.

We deliver on Saturdays to all central London and SL postcodes - Orders please by 10pm Wednesday. Dismiss