Come fry with me – the irascible chef

At his irascible best, Alastair Little stirs things up with this fascinating insight into the cosmopolitan influence of Anglo-Indian food.

For over 50 years Vijay in Willesden Lane has been serving several southern Indian specialities, which until relatively recently were not found anywhere else in London. I am married into a large Anglo-Indian family originally from Kerala but now scattered round the world, and although I was aware of Vijay for its vegetarian dishes, I was not aware of its Kerala connection until my brother-in-law told me it was where he went, as a young student in the 1970s, to eat when homesickness struck him. A move to Willesden in 2000 meant Vijay become my local curry house of choice, having the added benefit of serving some dishes from my wife Sharon’s place of birth. Prominent among these was Keralan lamb fry, which was remarkably similar in all respects – except the primary ingredient – to a dish in my wife’s repertoire called chicken fry. Served with boiled basmati rice and a strange yogurt and turmeric-based sauce called murucacha, this’ dry’ curry became one of my favourites.

Before I give the recipe for the dish, a bit of background info on Anglo-Indian cooking and society in general. The Anglo-Indians comprised a strange form of caste within, but also separate from Indian society, under British colonial rule. The descendants of marriages between East Indio Company soldiers and native brides in the late 18th and early 19th centuries, they become the buffer between the British Raj and the population in general. English speaking, with English names, eating curry with English titles, and selectively breeding for light skin, they were looked down on by everybody, and never really fitted in. However, the Raj saw fit to give them plum jobs in the bureaucracy, on the railways and in education. Many of these jobs were sinecures or posts they were not qualified for, but they prospered under the British and built up a considerable amount of resentment among the burgeoning native middle classes, as well as the poorer population, particularly in their role as petty and obstructive civil servants. 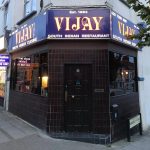 Come independence they were in trouble, abandoned by their masters, and subject to considerable persecution. Sharon’s father had land sequestered by the KeraIan government and his job as a train driver became insecure, so along with about two million fellow Anglo-Indians, he uprooted and emigrated. This exodus was worldwide: many went to Britain, lots to Canada, and in Sharon’s family’s case to Australia, once the policy of denying entry to people of colour (the notorious ‘White Australia policy’) hod been scrapped by the Whitlam government.

Wherever they went, Anglo -Indians took their distinctive cuisine made up of on amazing array of dishes. Brain curry, tripe curry, pepper water, cutlets (spicy meat rissoles), Kerala crab curry, spicy oxtail soup, ‘country captain’, ‘railway mutton curry’, to name but a few. They also adopted the regional dishes of their home states, so you can eat Bengali or Goan dishes alongside their own repertoire. Sometimes the origin of dishes and where they end up is very convoluted. The jalfrezi variety of curries started life in Kolkata’s thriving Anglo-Indian Quarter around Ripon Street as a way of using up leftovers in a typical Bengali sauce. They were cooked in woks that had been introduced by Chinese cooks hired by the wealthier families for domestic service. When Bengali cooks came to dominate the British curry house trade, they logically decided that if the Anglo-Indians liked jalfrezi back home, then the United Kingdom surely would, too. And they were right: it is now one of the most popular dishes ordered in British high-street curry houses.

Often dishes have English names but are distinctly Indian in essence, such as pepper water, a refreshing spicy broth also called rasam that’s drunk widely across the southern subcontinent. The Anglo-Indians seem inordinately fond of it, but their British rulers wanted a proper soup and the rasam was thickened with more lentils, to spoon-coating consistency, and became mulligatawny. The Anglo-Indians and the Goan mixed-race descendants of Portuguese colonists have mingled, and to some extent intermarried, and both groups’ dish of choice is often a vindaloo, originally made with pork and vinegar but now mutated into any fiery curry anywhere in the world. The Anglo-Indians also apparently do a spectacular oxtail vindaloo, which I have yet to try but is high on my bucket list.

1 Remove chicken meat from the bones and cut into 1cm pieces.
2 heat oil in a wok and add all the spices and the salt. Cook over a high heat until the mustard seeds begin to pop. Now add the curry leaves and a few seconds later the diced onion.
3 Cook, still over a high heat, stirring almost constantly for a few minutes until the onion begins to brown. Add the chicken pieces and continue until the meat starts to brown.
4 Add the diced tomato and continue the high-heat cooking until the tomatoes render some juices and these have time to evaporate, and the whole assemblage is beginning to caramelise.
5 Add the vinegar and cook for a further minute. Check seasoning for salt – it generally likes a bit more to counteract the vinegar.

Serve with plain basmati rice, a dollop of lime pickle and the following muracacha sauce. The dish goes well with top Clare Valley Riesling, which I always find are better when they’ve been open for a day or two.

I have not been able to find a recipe anywhere for this sauce, so this is my own interpretation. Once you add the yogurt it is imperative that the sauce does not boil or it will be ruined.

Heat the oil in a pan and add the mustard seeds. When they begin to pop add the curry leaves, followed a few seconds later by the grated ginger and diced onion.
Cook gently for a minute or so, then add the turmeric and salt. Continue cooking gently for ten minutes, adding a splash of water after five.

Mix the yogurt with a little water to thin it and add to the pan. Cook very gently until warmed through, stirring and watching continuously . When the sauce is warm to taste remove it from the heat, transfer to a cold bowl and check for salt, then set aside to cool. Murucacha is served cold, so do not attempt to it heat up.

Visit the SHOP for a range of Alastair’s legendary dishes, all cooked to order and delivered fresh.  Sign up HERE for irascible chefery at its finest.