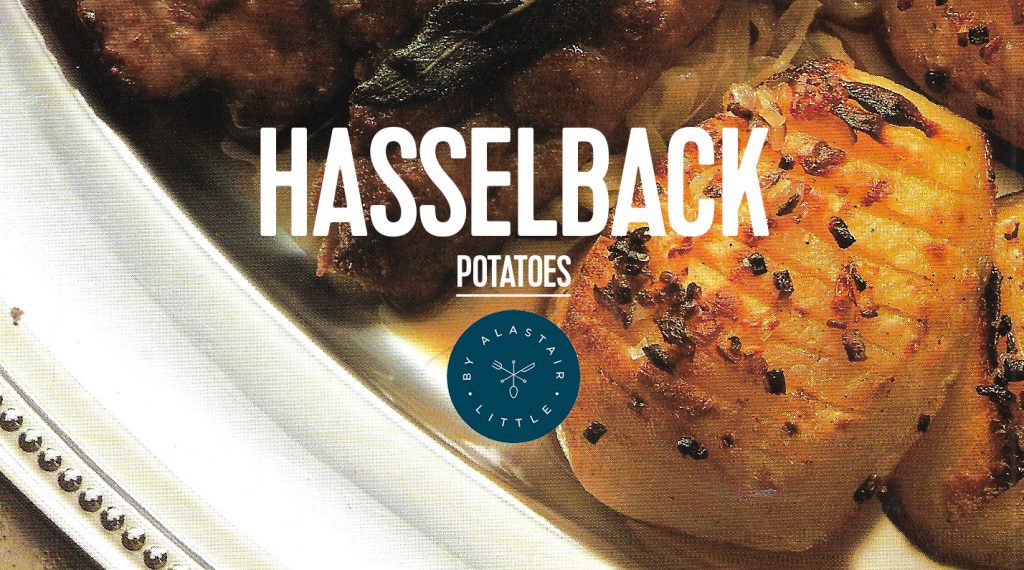 Hasselback potatoes is a different way of roasting potatoes that originated in the Stockholm restaurant of the same name, though the original version does not use olive oil. Why cutting the potatoes in this way should make such a difference to the texture and flavour is hard to say, but try them once and you may end up preferring them to traditional roast potatoes.

In my kitchen, working with the fierce heat of industrial ovens, we have to pour stock around the potatoes to keep them from burning and sticking. In a domestic oven the olive oil and butter mixture is sufficient for this purpose.

The addition of several unpeeled garlic cloves to the roasting juices gives a subtle depth to the flavour. These cloves are delicious in their own right, sweet and nutty without being overpowering.

Hasselback’s restaurant actually sells special wooden trays on which to sit the potatoes in order to limit the depth of cut so that they don’t get cut all the way through. You can use a metal skewer for this same purpose, pushing it through the base of the potato along its length, then cutting down to it. Obviously, remove the skewer before cooking.

Prepare the potatoes: peel them and cut them across downwards at a slight angle at 5 mm/ ¼ in intervals, being careful not to cut all the way through ( use a skewer as described above if unsure ). Put to stand covered in a pan of very cold water for 10 minutes.

Scatter the garlic in the prepared gratin dish. Then arrange the drained potatoes on top, cut sides upwards. Pour over the olive oil and dot with the butter. Season with salt and pepper.

Roast for 1 hour. After 30 minutes, baste every 10 minutes until done. The potatoes will brown on top and crisp, fanning apart along the cut lines. Do not attempt to move the potatoes while they are cooking.

Served from the gratin dish at the table.